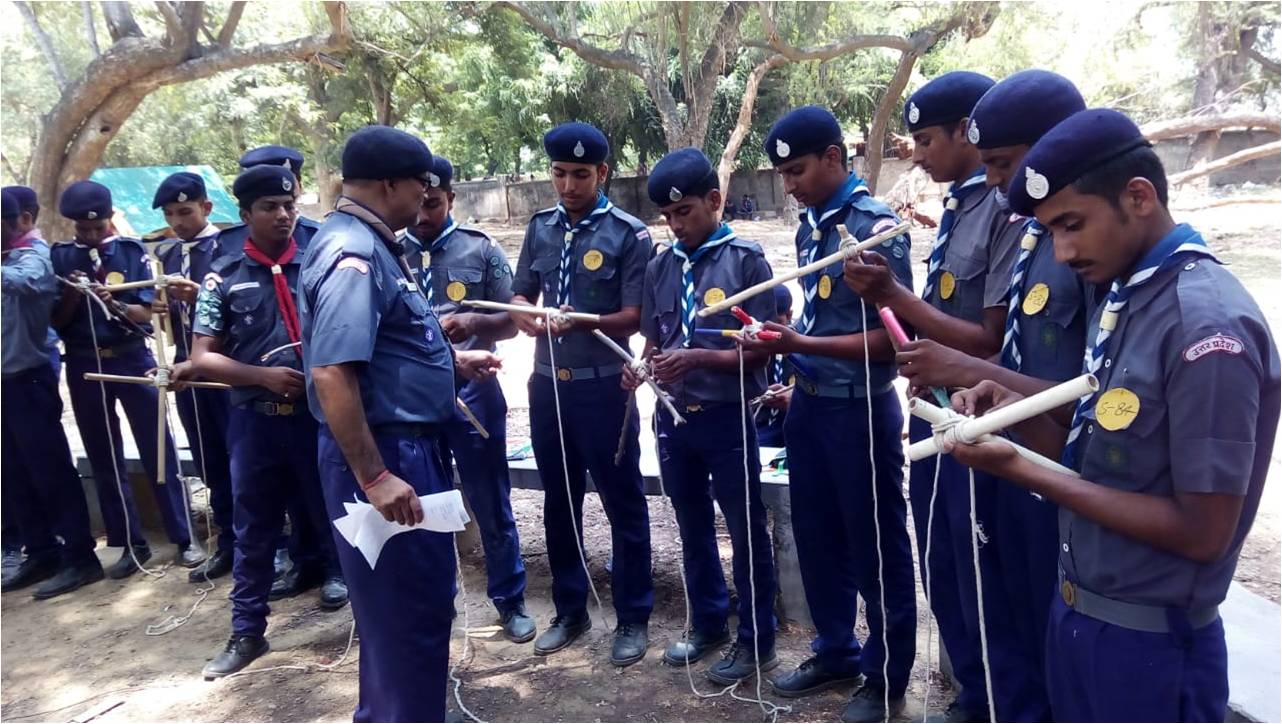 • A boy who is a citizen of India and who has completed 10 years but not completed 17 years of age is eligible to become a Scout Aspirant.
• A Scout Aspirant shall complete Pravesh requirement and will work for three months to the satisfaction of the Scout Master before being invested as a Scout.

(i) Have brief information of the origin of Scouting along with definition, purpose principles and method of the Bharat Scouts and Guides.
(ii) A Scout Aspirant must have holistic knowledge of the movement.
• Know the Scout Promise, Law & Motto.
• Have knowledge about the Scout, Sign, Salute and left hand shake and be able to demonstrate.
• Render daily good turn at home and maintain a diary at least for a month.
• Know the parts of Scout Uniform and how to wear it correctly.
• Know the composition and significance of the National Flag, the Bharat Scouts & Guides Flag and the World Scout Flag and Flag Etiquette.
• Sing correctly National Anthem, BSG Prayer and BSG Flag Song. Know about the composer, duration and meaning of the song.
• Attend at least four Troop Meetings.
• Undertake a 4 hour purposeful outing with his Patrol.
• He then makes the Scout Promise to the Scout Master and is invested as a Scout. He is eligible to wear Scout uniform and Membership Badge.
• The Membership Badge is a cloth badge with green background and Fleur-de- lis in yellow superimposed by the Trefoil with Ashoka Chakra also in yellow in the centre. The badge is worn in the centre of the pleat of the left pocket of shirt or at the same place on jersey.
Membership badge shall be issued by the Local or the District Association as the case may be, on the recommendation of the Scout Master.
• Scouts should be given opportunity so that they acquire the habit of doing at least one Good Turn every day.
• THE SCOUT PROMISE :
"On my honour, I promise that
I will do my best To do my duty to God and my country,
To help other people and To obey the Scout Law"
• THE SCOUT LAW (i) A Scout is Trustworthy.
(ii) A Scout is loyal.
(iii) A Scout is a friend to all and a brother to every other Scout.
(iv) A Scout is courteous.
(v) A Scout is a friend to animals and loves nature.
(vi) A Scout is disciplined and helps protect public property.
(vii) A Scout is courageous.
(viii) A Scout is thrifty.
(ix) A Scout is pure in thought, word and deed.
• MOTTO : The Scout motto is " Be Prepared". This has to be achieved by being physically strong, mentally awake and morally straight.
• SIGN : The Scout sign is given by raising the right hand in level with the shoulder, palm to the front with three fingers stretched together and the thumb closing on the little finger.
• SALUTE : The Scout Salute is given by raising the right arm smartly to the level of the shoulder, palm to the front with three fingers stretched together, the first touching the forehead above the centre of right eye brow and thumb closing onthe little finger. After salute the arm is smartly brought down. If a stick or thumb stick is carried, it must be passed to left hand or kept under left arm pit. When a staff is carried the salute isgiven with left forearm bent at right angle at elbow with three fingers open, thumb closing on the little finger palm down wards, the first finger touching the staff. When hands are occupied, the salute is given by eyes left or right as the case may be.